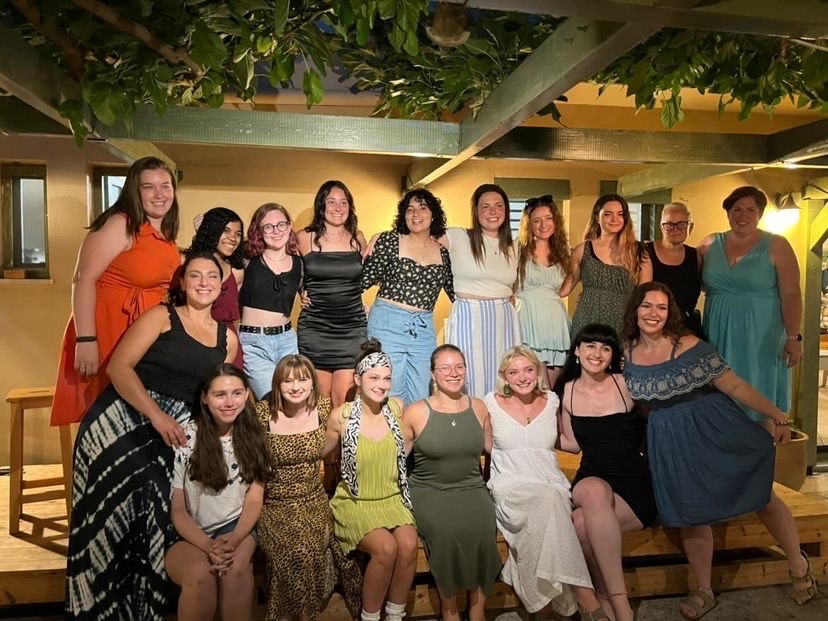 Allegheny College study abroad opportunities are a way for students to delve deeper into their studies while also learning about a new culture. This past summer, many students chose to study abroad to connect more with their major and become more familiar with a new culture.
According to the Global Education page of Allegheny College’s website, “students from 22 countries study and work at Allegheny and more than 190 Allegheny students and faculty participate in 40 programs in 20 countries.”
Hayley Simon, ’23, sought to improve her writing by studying abroad in Greece. Simon is an English major with an emphasis in creative writing. The program gave students the chance to work with different creative writing faculty away from home.
“It was both eye opening, because I haven’t done a lot of travel before, but also beyond the location, it was just having the opportunity to go out and meet other people in my field,” Simon said. “The island we were on, Crete, was a very secluded and peaceful environment where we could channel our focus into our writing.”
Being able to experience a place with a rich culture, learning about new people and trying new activities created a great environment for writing, according to Simon. She felt pressure to hone her skill as much as she could in the given time.
“You just kind of feel time ticking, because you want to balance out making the most of the experience and socializing with other writers and sometimes the pressure turns into writer’s block,” Simon said. “But you work past that by just throwing words on a page and worrying about whether it is good or not later.”
In some study abroad experiences, students were able to be more immersed in the culture through living with a host family.
Sarah Pillittieri, ’23, chose Italy as the destination for her study abroad program. She had the opportunity to stay with a host family and learn more about Italian culture.
“They certainly like their free time,” Pillittieri said. “Dinner every night was a good three hours long. In Italy it is more relaxed.”
Pillittieri explained that while they did not stay with their host families the whole trip, her host family treated her like a real member of the family.
“We went to the grandparents’ house and it just felt like being a part of their family even though there was such a big language barrier,” Pillittieri said. “It was kind of a shock at first but they welcomed us right into their home.”
Jillian Bradley, ’23, who also went to Italy, found comfort in the relatability of everyday interaction in the foreign country.
“Most similar was the conversations that people would have on the street and you realize that they are having the same daily conversations we have in their native language,” Bradley said. “It was kind of comforting to have that similar feeling.”
Pillittieri shared that despite being in Italy, she was not confronted with a language barrier in many situations outside her host family, because many of the places she visited were familiar with the English language. However, she relied on technology to communicate for the first few days with her host family. Later on, she picked up on many phrases.
“It was very scary the first day we were sitting at the table and were Google translating,” Pillitieri said. “I can’t tell you I was fluent after three days, but they were able to pick up enough English to talk to us and we were able to speak enough Italian to get by with them.”
Simon experienced some cultural differences during her trip — expecially around gender — that led to some uncomfortable and unfamiliar experiences.
“There were some times when we would feel a little tension because American women don’t behave as Greek women are expected to,” Simon said. “The men would go off and sit in their own corner and talk about philosophy and politics and when we would try to join the conversation we would get passive aggressive remarks. Their body language indicated that women were not supposed to be a part of those conversations.”
As a result of the experience, Simon said that many women wrote metaphorical pieces that had to do with gender role restraints and they were able to get their point across.
“We definitely did not want to just accept what was happening,” Simon said. “I think we produced some really strong writing about the subject and were able to read it out loud to the whole group.”
Despite the challenges she faced, Simon encourages people to study abroad and to choose Greece as their destination.
“If I can have experienced that negative little section of things and still come back and say it was one of the best experiences in my life then I would definitely encourage people to study abroad,” Simon said.

The Cost of Keeping Costco Dogs So Cheap

Buying makeup for her daughters’ program is overwhelming for Abbey.