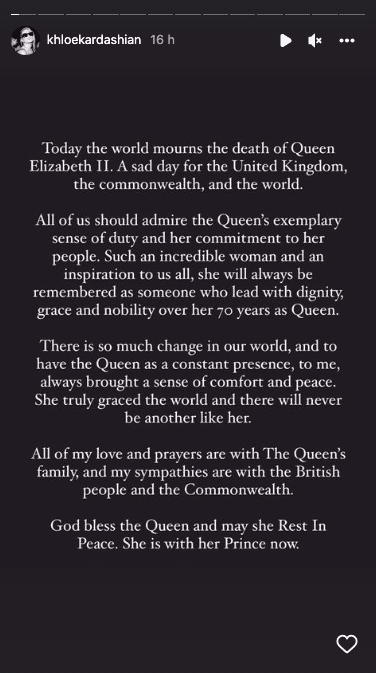 Ever since it was announced yesterday evening that Queen Elizabeth II had passed away, millions of people around the world have been sharing their tributes to the Queen on Instagram, Twitter and Facebook. Amongst them are a group of avid American celebrity Royal Family fans including Paris Hilton, Khloé Kardashian and Jake Paul who have all shared a tribute to Her Majesty.

Yesterday evening Buckingham Palace announced the Queen had died at Balmoral with a statement reading: “The Queen died peacefully at Balmoral this afternoon. The King and The Queen Consort will remain at Balmoral this evening and will return to London tomorrow.”

Paris Hilton was one of the first American celebrities to share a message of condolence calling the Queen the “original girl boss” on Twitter. Since her tweet many American celebrities have shared their own tributes which get progressively more bizarre. There’s celebrities who you just wouldn’t expect to be royal fans and some who are extremely dedicated to the Queen, including one celebrity who has a Queen Elizabeth II shrine.

These are the most bizarre American celebrity tributes to Queen Elizabeth II:

DJ, influencer and reality TV icon Paris Hilton paying tribute to the Queen is perhaps one of the more surprising celebrity tributes from yesterday.

She then went onto share a picture of the rainbow over Buckingham Palace and again said it was the end of an era.

It turns out Khloé Kardashian is actually a massive fan of the Queen and shared a lengthy tribute to Queen Elizabeth II on her Instagram story, shortly after the news was announced.

Khloé called the Queen a constant presence in her life who always brought her comfort and shared her love and prayers for the Royal Family.

She said: “Today the world mourns the death of Queen Elizabeth II. A sad day for the United Kingdom, the Commonwealth and the world. All of us should admire the Queen’s exemplary sense of duty and her commitment to her people. Such an incredible woman and an inspiration to us all, she will always be remembered as someone who lead with dignity, grace and nobility over 70 years as queen.

“There is so much change in our world, and to have the queen as constant presence, to me, always brought a sense of comfort and peace. She truly graced the world and there will never be another like her. All of my love and prayers are with the Queen’s family, and my sympathetic are with the British people and the Commonwealth. God bless the Queen and may she rest in peace. She is with her prince now.”

Khloé then went onto share a picture of the rainbows over Windsor and Buckingham Palace.

Grief brings out all kinds of different reactions in people and for Kanye West the passing of Queen Elizabeth II means he has decided to drop all of his grudges.

Earlier today Kanye posted on Instagram two text bubbles which read “life is precious” and “releasing all grudges today, leaning into the light” and then shared a black and white image of the Queen.

No one is more sad over the death of the Queen than mega fan and former Glee cast member Chris Colfer, who every year shares an image of the Queen to celebrate her birthday.

Following the announcement of her death Chris shared a heartfelt tribute where he thanked the Queen for the impact she had on him.

He said: “Thank you, Your Majesty, for your passionate devotion, unwavering stability, and unprecedented resilience. Your example had a profound effect on a boy eight-thousand miles away. ❤️🇬🇧.”

Chris posted a number of images of Her Majesty to go with his tribute including one of his collection of Queen memorabilia. In his memorabilia collection he has a commemorative plate, mugs and a statue of a corgi.

In news no one was probably expecting today, Dwayne “The Rock” Johnson shared a message of condolence to the Royal Family via a video of himself speaking in the gym.

He started his video by saying it had been “one hell of a Thursday so far” and went onto wish his love and light to the family. He said understood their pain and praised the life of the Queen whilst the gym music was blaring.

Dwayne said: “I’m so sorry. I know the pain. Like, we all know the pain. What a life! What an incredible life! I’ve never had the privilege or honour of meeting The Queen, but what a life.”

YouTuber Jake Paul is another unexpected fan of the Queen and yesterday he shared a condolence tweet for her.

He tweeted: “Dignity defined. An inspirational leader for many generations. Rest In Peace Queen Elizabeth II.”

Related stories recommended by this writer:

•Explained: Are we actually getting a Bank Holiday now the Queen has died?

Once Upon a Time: 4 Celebrity Relationships That Happened but Never Lasted Long