Home Business Finance A rail strike could result in an economic shock. What will Biden... 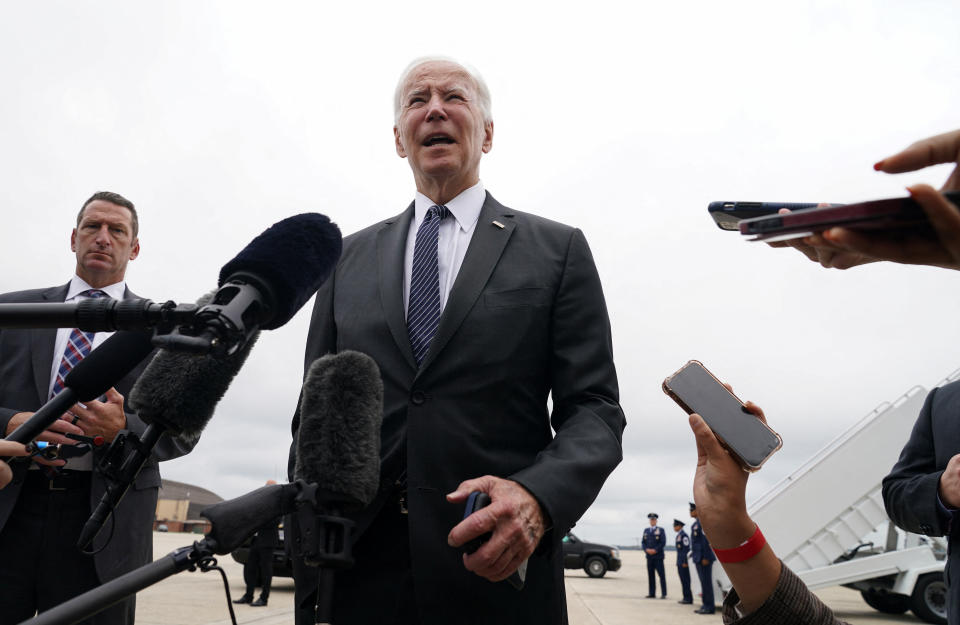 
There could be a major blow to the U.S. economy coming down the line: Freight railroads are preparing for possible strikes as a years-long labor dispute sits at an impasse ahead of a key Friday night deadline.

A strike would not only add to the nation’s supply chain woes, but throw a monkey wrench into President Biden’s plan to tout the nation’s economic progress as midterm elections approach.

On one side are freight companies like Union Pacific (UNP), CSX (CSX), and BNSF Railway, owned by Warren Buffett’s Berkshire Hathaway (BRK-A). On the other side are labor unions representing around 140,000 workers who are pushing for improvements in wages, working conditions, and time off.

And in the middle sits the Biden Administration. Labor Secretary Marty Walsh is rearranging his schedule to tend to the talks—and Treasury Secretary Janet Yellen is warning that failure would mean a “damaging supply shock to the economy.”

“The White House is closely monitoring the negotiations,” Yellen said Sunday during an interview on CNN while figures across the administration reportedly engage in a series of emergency meetings to head off the confrontation.

President Biden meanwhile is said to be monitoring the situation closely. He has long positioned himself as defender of unions, but is facing strong incentives this week to avoid a strike at all costs. A spokesperson for the Department of Labor told Yahoo Finance that a “shutdown of our freight rail system is an unacceptable outcome for our economy and the American people, and all parties must work to avoid that.”

As of Monday two key holdouts – the Brotherhood of Locomotive Engineers and Trainmen and SMART-TD – didn’t sound optimistic. In a joint statement, the unions said they are not close to an agreement while accusing the companies of “what can only be described as corporate terrorism.”

A recent report from the Association of American Railroads found that a stoppage could cost the U.S. economy $2 billion per day and result in widespread supply chain snarls potentially, shutting down 30% of the country’s freight capacity and also halt most passenger and commuter rail services.

Talks have reached the point where some railroads are now securing shipments of hazardous and sensitive materials to make sure that no such cargo is left on an unattended train on Friday night.

At spokesperson for BNSF Railway told Yahoo Finance that securing the material needs to happen now because “while we have made significant progress with several of the unions, we must have every union under an agreement.”

Back in July, Biden appointed a Presidential Emergency Board to “make sure America’s freight rail system continues to run without disruption.” Then, in mid-August the Board released their recommendations outlining ideas that included annual lump-sum payments, healthcare adjustments, and changes to work rules.

In a statement at the time, the Association of American Railroads which represents the industry said the recommendations would “provide a useful basis to reach a resolution.”

But progress has been slow. Because of government rules, even after a mandatory 30-day “cooling off period,” strikes or lockouts are possible. That clock runs out at 12:01 am ET on Friday.

A spokesperson for the Department of Labor told Yahoo Finance that Secretary Walsh – who often touts his time as a union official – is “engaged to push the parties to reach a resolution.” The two holdout unions say that the key remaining issue are policies that, they say, penalize engineers and conductors for getting sick. They want stronger protections than what the Biden administration has proposed saying “sadly, the Presidential Emergency Board recommendation got it wrong on this issue.”

Nine other smaller unions have reportedly accepted tentative deals built about the emergency board recommendations. But the two holdout unions represent approximately half of the unionized workers involved in freight rail making their assent crucial.

Policymakers do have some options when it comes to further action if the deadline is breached.

A continued impasse could open the door not only to strike, but also to Congressional intervention. The Congressional Research Service notes that there are a range of options for both executive and legislative action.

A key option would be legislation from Capitol Hill that could prohibit a strike or require the two sides to submit to another emergency board, in effect of delaying a strike. Lawmakers could also simply force all parties to accept a board’s recommendations.

These types of disputes are governed by the Railway Labor Act which deems that direct intervention from Washington is warranted when the dispute threatens substantially to interrupt interstate commerce. But report also notes that the law is vague on exactly how such a threat is determined.

Groups representing interests like agriculture and trucking are already urging Congress to intervene with lawmakers – many of whom are just returning to Washington after the summer recess.

Meanwhile, the two remaining holdout unions remain wary. “Congress,” they said Sunday, “should stay out of the rail dispute and tell the railroads to do what other business leaders do — sit down and bargain a contract that your employees will accept.”

Ben Werschkul is a Washington correspondent for Yahoo Finance. Dani Romero contributed to this report.

Read the latest financial and business news from Yahoo Finance

The Global Trade Finance Market is expected to grow by