This week won’t have Fed speakers as they enter the blackout period ahead of their February 1 rate announcement. That will leave us with a somewhat slow week, with economic data and bond auctions as the main headlines.

The big data points will be fourth quarter , , and , which won’t come until the end of the week. GDP is expected to climb at an annualized rate of 2.7% for the fourth quarter, while the price index is expected to have increased by 3.2%. That translates to a roughly 5.9% nominal growth. The Atlanta Fed currently sees fourth-quarter GDP at 3.5%. Any number around 3% is very healthy and has an above-trend growth rate.

This week, there will also be , , and auctions. This will be important because, as I expected, the Treasury General Account started to tick higher at the end of last week. The Treasury reports the TGA’s value daily, with a one-day lag. The TGA was up to $455 billion as of Thursday. While the Treasury is using extraordinary measures to fund the government, I think the Treasury will probably keep building up the TGA so it can have the extra cash for when the debt ceiling debate kicks into higher gear and it has exhausted all of its other options.

The TGA and reverse repo activity have the biggest impact on reserve balances, and reserve balances fell through Thursday for the week, which helps to explain the drop in the S&P 500 mid-week. 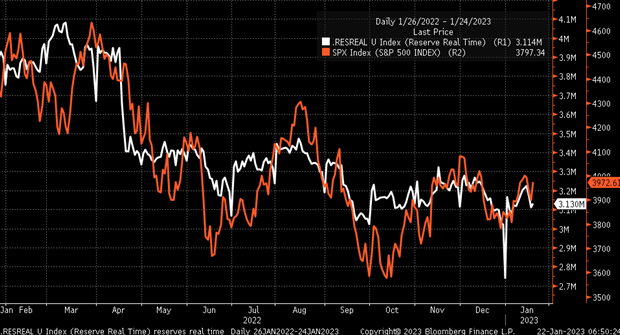 The appears to have formed a corrective running triangle, a consolidation pattern. This pattern suggests we break lower; it has three touches on the top of the triangle and just two contacts on the bottom of the triangle—usually, the triangle patterns break following the third touch of the trend line. 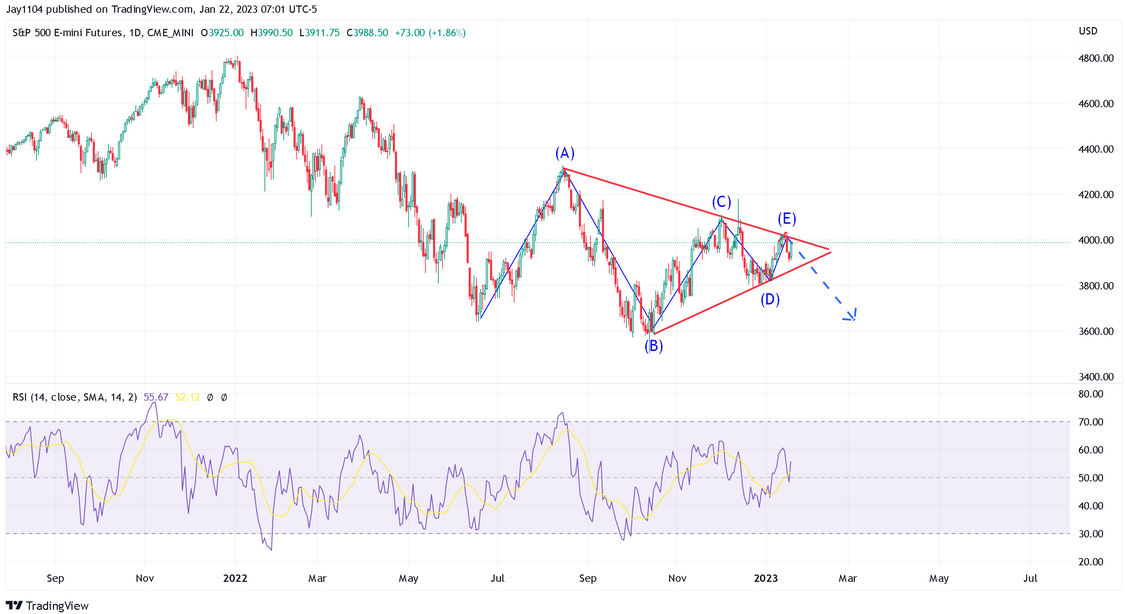 What makes this more convincing to me is that we see the same pattern in the bank index. 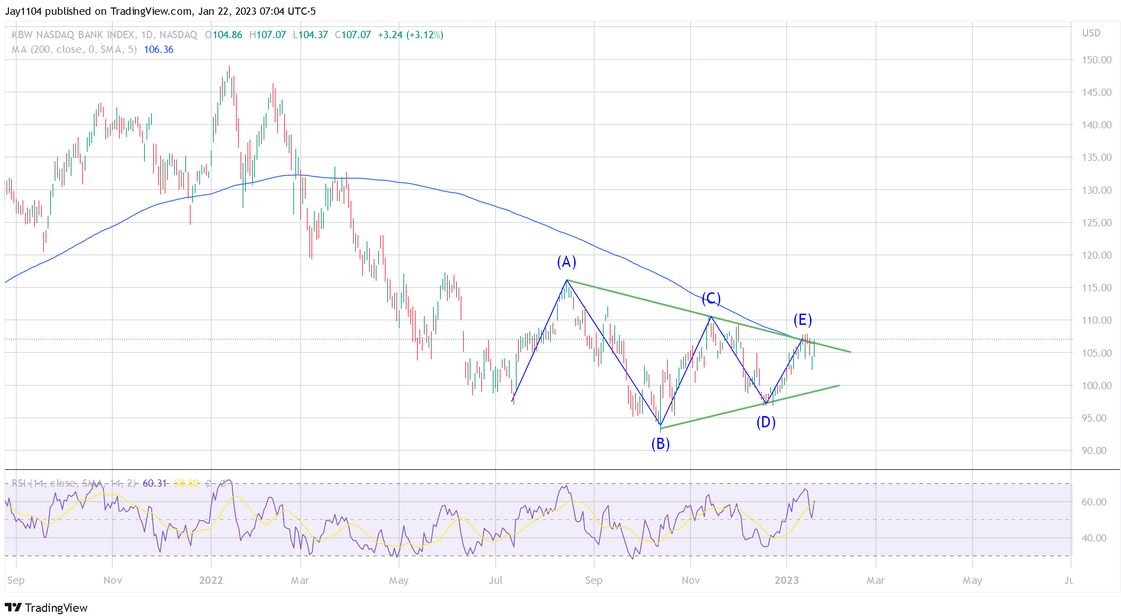 The same scenario is not visible currently in the Invesco QQQ Trust (NASDAQ:) or Dow Jones Industrials. The has been trending sideways for a bit and has been near a main support level of around 33,200, so that is the level to watch this week for the Dow, which will need to hold to avoid further losses. 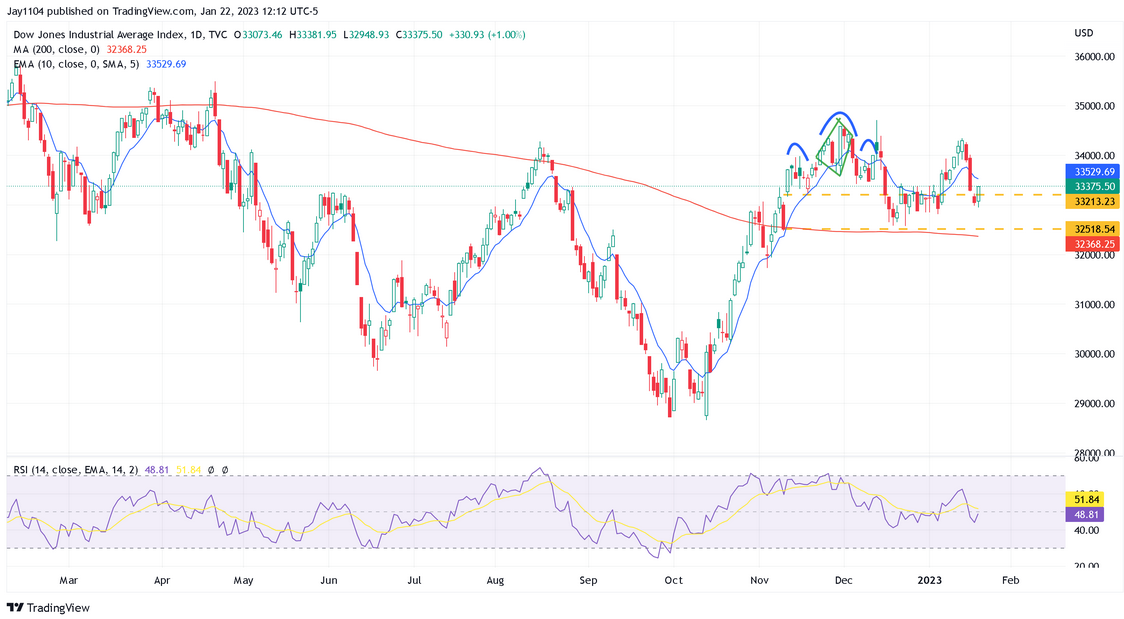 The Dow continues to be the key to the market in many ways because it has outperformed quite a bit, and if it faltered and declined, it would probably be a warning sign for the rest of the market.

One reason is that the Dow is heavy in financials and industrial stocks, and these have been two of the biggest gainers since the middle of October. Goldman (NYSE:) has been one of those big gainers but has pulled back sharply since it reported fourth-quarter . Goldman is also close to support around $340, which could serve as a leading indicator for the Dow, should Goldman begin to break lower. 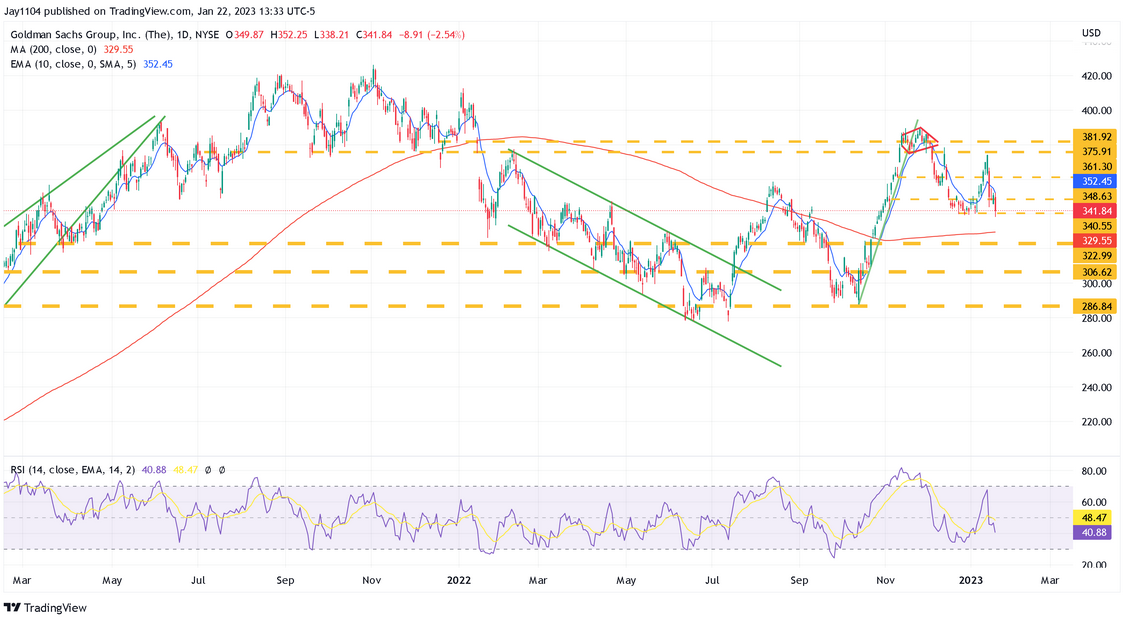 Ford (NYSE:) has been trending lower more recently in what appears to be a descending triangle. It is also apparent that the RSI is trending lower, suggesting a loss of bullish momentum in the share price. For Ford, the big level of support that needs to hold comes at $11. 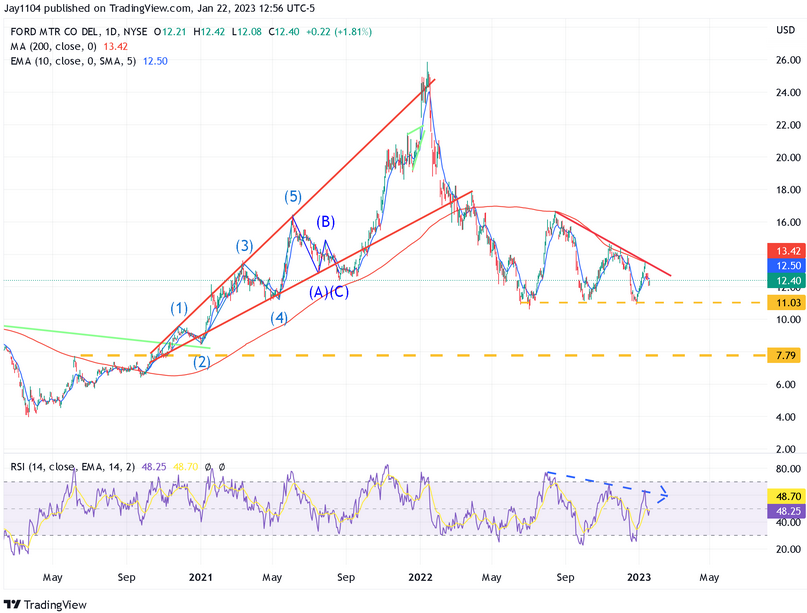 Netflix (NASDAQ:) spiked following its , delivering better-than-expected net additions. The stock rallied on Friday, and it appears it could have just been related to a significant drop in implied volatility. We saw something similar last week on banks like JPMorgan (NYSE:), so it would not be surprising if Netflix gave back some of Friday’s gains this week.

That’s all for this week.