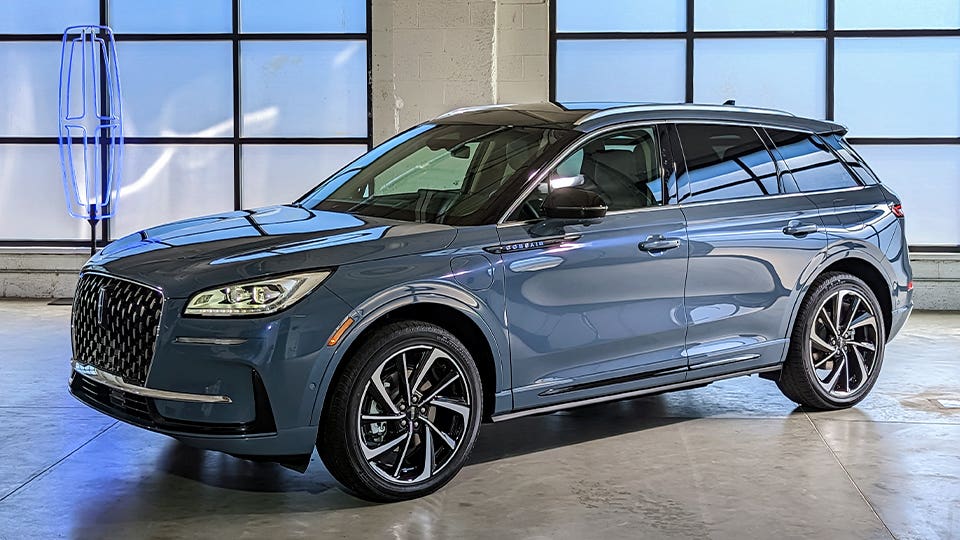 
Over the past decade, Lincoln’s lineup has undergone a fundamental shift from fancier Fords to vehicles that don’t look or feel anything like their corporate siblings. The automaker’s sedans are gone, at least in North America, but the brand is selling better than ever, especially in China. The next step in the luxury brand’s visual evolution, at least in America, begins with the refreshed 2023 Lincoln Corsair.

The entry-level Corsair is the best-selling of Lincoln’s American SUV quartet, and its new look is part of an anticipated mid-cycle refresh. The exterior changes are fairly limited, although less subtle than the updates to the full-size Navigator earlier this year.

The most obvious is the new grille which is substantially larger than before and no longer sunken into the fascia. The basic shape, which Lincoln design manager Rob Gilardi refers to as the “Kings crown,” first appeared in late 2021 on the Chinese-market Zephyr sedan. Notably, 2022 is the first year where Lincoln’s Chinese-market sales have outpaced its U.S. numbers.

Gilardi describes this as the new face of Lincoln, at least for its internal combustion models. Presumably, we’ll see something similar on a mid-cycle refresh of the Aviator sometime in the next year, and the new gas-power Navigator in 2024 before all of these models are eventually replaced by EVs sometime this decade.

Those models will adopt the grille-free look that we saw this past spring on the Star concept. The biggest difference in the Corsair grille treatment compared to the Zephyr is that instead of a horizontal chrome bar running across the upper portion of the grille through the star logo, the bar is at the bottom. Like current Lincoln models, there’s a matrix of star outlines across the grille.

We were shown two variations of this at a Ford-hosted press preview, one that is part of a Jet Pack black appearance package on the Standard trim and the bright satin version on the plug-in hybrid Grand Touring. These two trims plus the mid-level Reserve trim carry over for the new model year. Aside from the grille and some new wheels and colors, the rest of the exterior remains essentially the same as before.

The interior changes are also mild but more functional. The previous 10-inch central touchscreen has been replaced with the same 13.2-inch unit now found in the Nautilus and Navigator. That bigger screen comes with electronics and software upgrades that include the latest Sync 4 infotainment system. That means it will have new features like the ability to show both navigation and media player controls side by side as well as embedded support for Alexa voice services.

While the upper screen has grown, Lincoln has paired back the cantilevered control panel that jutted out below the piano key style transmission selector keys. Previously the climate control switches lived below buttons for hazard lights, camera views and volume control.

Sadly, those controls are now virtual buttons on the bottom of the larger touchscreen. While physical climate controls are always better than touch, temperature and fan speed can easily be managed by voice in Sync 4 and the system works fairly reliably.

The other big tech change for 2023 is the addition of ActiveGlide hands-free driving assist. ActiveGlide is Lincoln’s branding for what Ford calls BlueCruise. Like other Lincolns and Fords, it uses four surround cameras and five radar sensors to detect other vehicles and the lane markings on divided highways.

Just last week, Ford announced a major upgrade to the system that includes automatic lane changing and predictive speed control to slow the vehicle when approaching sharp curves. It will also nudge the vehicle over while staying in the lane when passing large trucks. As with other hands-free systems, there is an infrared driver monitor system to make sure the driver’s eyes keep watching the road while using ActiveGlide.

There are also some revised materials and color combinations in the Corsair cabin, mostly aimed at achieving a more restrained appearance with less saturated colors. On the Grand Touring we saw, there is an aluminum panel with a diamond pattern across it. Some of the diamonds are translucent and backlit, but there is a randomized pattern to which are lit, trying to evoke stars in the night sky.

The one other notable change to the 2023 Corsair is the discontinuation of the 295-horsepower 2.3-liter turbocharged four-cylinder engine. The base 250-hp 2.0-liter engine remains for the Standard and Reserve trims.

Those that want a performance boost will have to opt for the 266-hp plug-in hybrid powertrain in the Grand Touring. The PHEV uses the same 2.5-liter naturally aspirated four-cylinder engine and front hybrid drive unit used in the Escape hybrid and plug-in hybrid but adds an electric motor on the rear axle for on-demand all-wheel-drive. The 14.4 kWh lithium-ion battery that sits under the rear seats provides an EPA-estimated 28 miles of electric driving range on a charge.

The updated Lincoln Corsair will go on sale in early 2023.