The Nasdaq-100 index started 2023 on a positive note with gains of more than 5% as of this writing. And there are chances that it could have a better year following a big slide in 2022 that saw the index lose a third of its value amid surging inflation that led the Federal Reserve to raise interest rates.

It is worth noting that the Nasdaq-100 has a history of bouncing back strongly following a down year. If that’s indeed going to be the case in 2023, investors might want to load up on a couple of Nasdaq stocks that sustained a big beating over the past year. 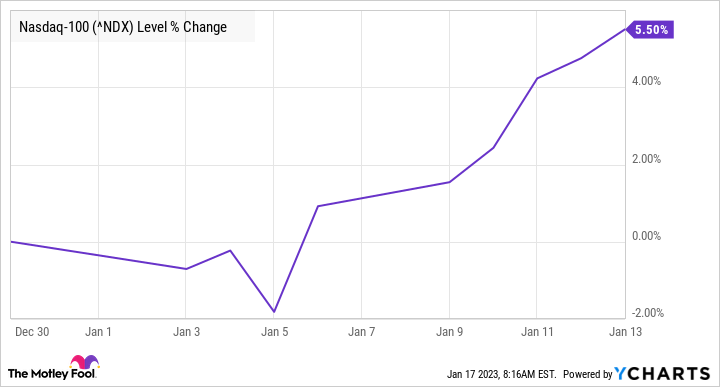 Amazon stock is off to a terrific start in 2023 with gains of 17%. The company could sustain this momentum in a favorable stock market thanks to a potential improvement in the e-commerce market this year.

Global e-commerce revenue is expected to increase by 10.4% in 2023, which would be an improvement over last year’s 9.7% growth. It is also worth noting that the e-commerce market reportedly had a marked slowdown in 2022.

So a favorable year-over-year comparison in 2023 should be a tailwind for Amazon’s e-commerce business. The U.S. and Europe are expected to be the key hot spots for e-commerce over the next three years, clocking total revenue growth of 50% and 47%, respectively. In the U.S., e-commerce revenue is expected to grow from $908 billion last year to $1.4 trillion in 2025.

With Amazon controlling an estimated 40% of the U.S. e-commerce space, the company should witness nice growth in revenue over the coming years. Moreover, Amazon is adopting new strategies to ensure that it captures a bigger share of the pie. The company decided to expand its Buy With Prime shopping program to merchants across the U.S.

The program was earlier available by invitation only following its launch in April last year, and the general availability of it to U.S.-based retailers will give Amazon a solid opportunity to monetize its huge delivery and logistics infrastructure. Amazon claims that the Buy With Prime program can increase shopper conversion by 25% for merchants. As a result, online merchants might line up to use Amazon’s program for a fee, giving the company a nice shot in the arm.

Throw in other catalysts such as the booming advertising business and Amazon’s dominant position in the lucrative and fast-growing cloud infrastructure market, and the company seems set to deliver a stronger performance in 2023.

With this Nasdaq stock looking like it might have a solid year ahead, investors might want to buy it right away as it is trading at 1.9 times sales, a discount to the five-year average of 3.8.

After a terrible 2022, Airbnb stock jumped over 17% in the early days of 2023. There are a few reasons the homestay and vacation rental company could maintain this impressive start.

First, Airbnb’s performance remained robust in 2022. The company’s top line is projected to increase 39% for the full year to $8.35 billion, while it is expected to post a profit of $2.58 per share as compared to a loss of $0.57 per share in 2021. The company’s impressive 2022 growth can be attributed to the healthy demand for travel, driving a nice increase in Airbnb’s nights and experiences booked.

The number of nights and experiences booked by Airbnb customers in the third quarter of 2022 increased an impressive 25% over the year-ago period. What’s more, customers were also willing to spend more money on the platform, and the average daily rate increased 5% over the prior year to $156. Excluding the impact of currency fluctuations, that increase would have been 12%.

The good news for Airbnb is that travel demand is expected to remain healthy in 2023 as well. Market research firm Euromonitor International estimates that international travel could increase 40% this year.

A report from Skyscanner, an online travel marketplace, says that 45% of 11,000 travelers spread across 10 countries surveyed by the firm plan to travel more this year. And 41% of the respondents intend to spend more as well.

As such, Airbnb could grow faster than analysts are expecting in 2023. Wall Street would be content with a 12% jump in revenue to $9.35 billion and a 7% increase in earnings per share at Airbnb this year, but the company has the potential for a stronger performance. That could help the stock sustain its impressive start to the year, which is why investors should consider buying it before it soars higher.