Home Food 15 ’90s Foods That Should Never Make a Comeback 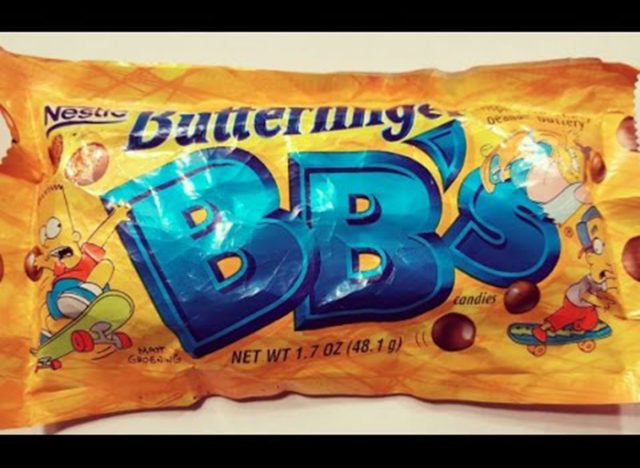 
Thinking about the best foods from the ’90s can make anyone put on their rose-colored glasses and wax nostalgic about all of the timeless products that came out of the era. Some classic items like French Toast Crunch or Waffle Crisp Cereal were discontinued, only to make a comeback after fans rallied together on their behalf; others simply faded away into obscurity.

While the return of your favorite candy, drink, or snack from the ’90s can get you excited to take your tastebuds on a trip down memory lane, many of the products we enjoyed back then had little to no nutritional value. And while enjoying anything in moderation is part of a healthy lifestyle, it’s hard to identify anything even remotely redeeming in the ingredients panel on most of these products. So while we won’t deny that we once loved every treat on this list, our bodies (and probably our doctors) would have to agree that these snacks and treats are probably better left in the past.

Read on for our master list of classic ’90s foods we hope won’t be rebooted—if only for the sake of our collective health.

Few candies defined the ’90s like Butterfinger BBs. This offshoot of a traditional Butterfinger bar didn’t look a thing like its namesake—each package came with a solid amount of chocolate “BBs” filled with the same flakey insides of a Butterfinger. While this candy tasted delicious, it wouldn’t win any prizes in this day and age for its nutritional content.

Like many other candies of the era, this offering came loaded with fat and sugar, while providing little solid nutrition. This classic confection notably featured a whopping 28 grams of sugar, making it one ’90s food that we’re probably better off without.

Broadly speaking, no balanced breakfast should start with cookies, even in cereal form. The massive amount of sugar in Oreo O’s should easily dissuade any health-conscious person from wishing for this breakfast staple would return.

Many reminisce about the ’90s being a golden age of Keebler cookies, and Fudge Shoppe Magic Middles ranked as many snack fans’ favorite offering from the cookie line. Most cookies don’t contain great nutritional value to begin with, but this particular cookie came loaded with 8.5 grams of fat—enough to make even certain fast-food items blush.

Wonder Balls popped up as a North American answer to the Kinder Egg, a banned food in North America. Each Wonder Ball chocolate ball came wrapped in colorful foil and featured surprise toys or stickers inside. While ’90s kids couldn’t help but love this candy, anyone in this day and age might take offense to the massive amount of sugar and fat per serving in one of these candies.

Like cookies and candy, most traditional frozen desserts and ice creams are already lacking in nutritional benefits, but it turns out that ice pops loaded with sugar aren’t great either. Flintstones Push-Up Pops may have contained a relatively low number of calories, but most of them came straight from sugar. Is it the worst dessert you could eat? No, but it definitely contributed to some extra unnecessary processed sugar in a ton of kids’ diets back in the ’90s.

Anyone who lived through the ’90s can’t forget how purple and green Heinz ketchup took America by storm. These novel colors made this condiment fun, but they were also loaded with processed sugar and artificial ingredients (though that wasn’t specific to these versions; most condiments are).

Still, while each serving of EZ Squirt colored ketchup only contains 20 calories, the vast majority of those calories come from the sugar content. Factor in the fact that a serving size was only one tablespoon and imagine how easy it would be to go overboard with this colorful sauce. And honestly, setting that aside, the idea of green ketchup just feels like a bizarre novelty that we don’t need in 2022.

The ’90s proved that shoppers wanted to eat their favorite cookies and candy for breakfast, and food companies pulled out all the stops when it came to meeting this demand. Teddy Grahams Breakfast Bears rode this very wave and packed 14 grams of sugar into every small serving.6254a4d1642c605c54bf1cab17d50f1e

In the current day and age, many folks might not want to start their day with a bowl full of sugar and would be more than happy to let this cereal fade back into the past without a full-on revival.

Fruit String Thing ranked among the most popular fruit snacks that could grace your lunchbox back in the day, but just because these had the word “fruit” in them doesn’t mean they were good for you. Like most fruit snacks, Fruit String Thing came loaded with sugar, and these eventually lost out to their more popular cousin, Fruit By The Foot.

Granola bars maintained a health-conscious image throughout the ’90s, and Kudos found a way to take them to the next unhealthy level. These popular granola bars came loaded with chocolate and candy, despite being marketed as a healthier snack just because they were packaged with granola. In retrospect, the amount of carbs and sugar in each Kudos bar certainly contributed to our collective acknowledgment as a society that granola bars are not really the healthy snack we once believed them to be.

“Snackwells, which are arguably a pioneer of the low-fat craze of the ’90s, triumphed [in] the ‘health’ food aisle as a ‘healthy’ cookie (because it was low in fat),” Rachel Fine, RDN at To The Pointe Nutrition, says. “But since then, we not only know that fat is an integral macronutrient for both health and satiety, eating the real deal cookie will offer a more satisfying experience in the long run.”

A scant number of these cookies easily make up what they lack in fat with carbs and sugar, making them an unbalanced glimpse into the health crazes of the decade.

The ’90s had a ton of drinks that defined the era, but few could compare to the iconic image of Fruitopia. This juice-like soft drink came in a ton of flavors that blended fruits and even came in bottles that looked like soda. This packaging wasn’t too far from the nutritional truth—Fruitopia contained enough sugar to easily compete with any soda, despite being marketed as juice.

Kellogg’s Cinnamon Mini Buns Cereal sounds about as healthy as it was. This cinnamon bun-inspired cereal drew in fans thanks to its flavor and kept winning them over with its hearty amount of refined sugar and carbs per serving. This breakfast product ended up fading away once we made it to the 2000s, and we’re not expecting a revival.

Pizzarias Pizza Chips came to define pizza-flavored chips for an entire generation thanks to their one-of-a-kind flavor. You’d probably have a better time losing weight by eating pizza than digging into a pack of these chips—the snack was filled with fat and carbs.

Pizzarias Pizza Chips contained a ton of carbs and fat, but they don’t hold a candle to Planters’ P.B. Crisps. These crunchy, peanut-shaped snacks came in a variety of flavors and built up a solid reputation thanks to the fact that they tasted like nothing else out there. Unfortunately, they also came loaded with fat, sugar, and carbs per serving.

Ah, Squeezits—another example of soda masquerading as juice. These fruit-flavored plastic tubes of artificial neon “juice” came packed with enough sugar to make any modern parent faceplant into their oat milk. Like everything else on this list, we’ll remember them fondly, but we hope never to see them on grocery store shelves again.

US 2021 Audiobook Revenues Up 25 Percent

The Start of a New School Year in New York City